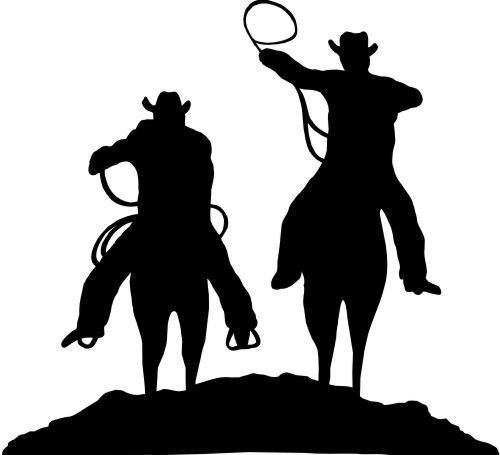 It occurs to me that despite the fact that Cowboy Jensen has earned his rightful place as our mascot (and his friend Cowboy Jared sort of hangs around as a back up) we haven’t written nearly enough about cowboys.

But that’s all about to change!

In honour of their self-sufficiency, riding skillz and fabulous headgear here are ten of my favourite songs about cowboys and girls:

I’m not much of James Taylor fan, I tend to find his lyrics insipid and his voice whiny. But ‘Sweet Baby James’, the title track from his second album, is different. It’s a mellow lullaby about a cowboy settling down for the night. And don’t worry, he wasn’t narcissistically calling himself sweet, it was written for his nephew who shares his name.

Plus there’s a Pokémon episode named after the song. What’s not to love?

Willie Nelson – ‘Cowboys Are Frequently, Secretly (Fond of Each Other)’

Ned Sublette’s gay cowboy song is straight-up fabulous, it’s like an actually good, musical and much shorter version of Brokeback Mountain. Willie Nelson’s cover- partly inspired by his friend/tour manager David Anderson coming out– made the song famous, and as everyone knows Willie Nelson rules (and not just cos he got away with getting stoned at the White House).

I think I might make a gay-friendly country music playlist. It’ll definitely include this, Mason Jenning’s ‘Damn (What A Beautiful Man)‘ and Garth Brooks’ ‘We Shall Be Free‘…

Dolly Parton – ‘Why’d You Come In Here Lookin’ Like That’

I adore Dolly Parton and her whole backwoods Barbie image. She was making a career out of being over the top, big-haired and a gay icon long before Lady Gaga (and she’s a Gaga fan! If the two of them ever duet I may explode with happiness). Her voice is fantabulous, and this is just a supremely cute song about a guy who’s ‘all decked out like a cowgirl’s dream’.

Check out the video, it made me love her even more, and I didn’t think that was even possible.

This 70s track about a guy who some people call the space cowboy (though some people call Maurice) enjoyed a renaissance in the 1990s thanks to a Levi’s ad (which I think features a really weird pronunciation of the brand name, although the internet appears to be divided over this important issue).

It’s pretty much impossible not to sing along to this song, especially the wolf whistles, so it definitely deserves a place on this list. Even if the (space) cowboy theme isn’t very strong throughout…

Speaking of which, this Jamiroquai song from The Return of the Space Cowboy, stuck to its motif rather well with lyrics about an inter-planetary good vibes zone. Or maybe it’s just rife with drug references. Ah, the 90s. It shouldn’t be confused with the ‘N Sync song of the almost same name (that’s got an additional Yippie-Yi-Yay in brackets) which is batshit insane and suggestive of extreme drug use all in its own way.

A mashup of the two would make my day, FYI, but for now I’ll contend myself with this amalgamation of cheesy 90s pop.

Ok, so Kid Rock is kind of wildly lame but this song about a dude who wants to head out West so he can be cowboy is pretty fun. And surprisingly funky. And if his lyrics are anything to go by he’s got some stellar cowhand credentials, how can you claim that someone who can apparently smell a pig from a mile away shouldn’t get a spot on this list?

But if you’re not convinced you can always amuse yourself with this ‘Plowboy‘ spoof instead.

This song, about a major player in the cowboy scene, is from an album called The Lonesome Crowded West which is wonderfully evocative of the general cowherding theme of this post. I’ve got to admit that as much as I love this song, it ha’s been slightly tarnished for me ever since I realised that the lyrics aren’t actually “he goes to the reservation, drinks some ketamine”. (Maybe I’m wrong about the drugs in ‘Space Cowboy’ too. I mean, those leaves in the video could be anything really. WHO KNOWS ANYTHING ANY MORE.)

I was also saddened to realise that they took their name from a Virginia Woolf short story, and aren’t actually a Modest Mussorgsky tribute act. Sigh.

This song was written by Larry Weiss, and made famous by Glen Campbell. It’s about a wannabe Broadway performer wandering around covered in rhinestones, includes lyrics about a star-spangled rodeo and inspired a Dolly Parton movie, and yet doesn’t appear to be a gay anthem. Whatever, it’s totally going on my aforementioned gay-friendly country playlist.

The people of urban dictionary will back me up at least.

Imani Coppola – ‘Legend of a Cowgirl’

This song off of Imani Coppola’s debut album Chupacabra, with all of its whiskey-drinking and boot-wearing, does a good job of representing for the female cowpokes of the world. It’s a fun, thumping tune that samples this fabulous (and kind of geeky) Donovan song.

Still I’m not sure that I like ‘Legend of a Cowgirl’ quite as much as ‘I’m a Tree‘, from the same album. The latter is just so…wonderfully odd.

This song doesn’t actually include the magic word, unlike several of Johnny Cash’s other songs like ‘Streets of Laredo’ and ‘The Greatest Cowboy of Them All’, but it is all about The Singing Cowboy himself. ‘Who’s Gene Autry?’ is a father explaining to his son about his own childhood love of Gene Autry’s films, and references his signature song ‘Back in the Saddle Again‘.

It’s an adorable song about fandom, and what more could those of us who appreciate Cowboy Jensen ask for?

Tell us about your favourite cowboy and girl related songs in the comments!