As you may have ascertained I was away for a few days while Miss Penn is also on holiday, which allowed a rebel faction to take over Pop Culture Playpen.

I was off at Bestival myself, a lovely, magical festival on the Isle of Wight full of hills, hippies, hammocks and hidden delights.

So I thought I’d share one of the highlights of the experience for me- and combine it with pimping out a current artist I seem to be becoming increasingly obsessed with. 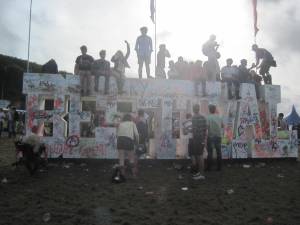 I got to see Kate Tempest– rapper/spoken word artist/generally entertaining person- twice over the weekend. The first time was a solo set in the Ambient Forest. I’ve seen her several times before, and she certainly didn’t disappoint.

I’m loath to call what she does “poetry” or “spoken word” (even if they are apt labels) because I think they conjure up exactly the wrong image, and can put some people off checking out something that I’m convinced they would love.

Tempest is rhythmic and interesting and unpretentious, and essentially everything that I don’t associate with a lot of mainstream spoken word stuff.

The enthusiastic crowd around her- who were skipping Kelis to be there- wouldn’t let her finish and we were generously rewarded with encore after encore.

Later on I got to see her band, Sound of Rum, play in the teeny Sunday Best record shop- which is made mostly of cardboard.

It was a brilliant show, not only because her lyrics work really well with the musical accompaniment, but because the entire band was so enthusiastic and involving. The audience was invited to crowd into the tiny space- and we did swarm in immediately- while Kate jumped up on the counter top to create as much extra room as possible.

I was dancing between the guitarist and drummer, while Mr Meaner was actually behind them. And I realised that this was something special. There is no doubt in my mind that Sound of Rum are only going to get bigger and better, I think they’re on the verge of hugeness, and I’m really glad I got to experience such an intimate show before something like that becomes impossible to fathom.

But it struck me, during the “if you like us, tell your friends” patter, that I’d never written anything about Kate Tempest before. And I wondered why. The answer’s pretty simple… I didn’t realise I needed to.

I’ve watched her perform to rapturous applause at Book Slam, I saw her judge the Roundhouse Poetry Slam, I’ve followed the growing buzz around her and the band. I wasn’t really aware that there were people who were missing out.

So I hope you check out the videos, and I hope you enjoy them. I’d recommend buying the album if you like, well, anything that involves music and/or words. And if you get a chance to see these guys live- appreciate the fuck out of the opportunity.

One thought on “The Calm Before The Tempest”