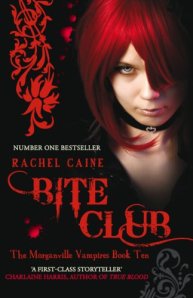 I probably shouldn’t have begun my acquaintance with Rachel Caine’s Morganville Vampires via the tenth book in the series, but Bite Club came into my life by way of Miss Penn and as a fan of paranormal romance I gladly accepted it. While I definitely would have preferred to start at the beginning, I found Bite Club seductive, fast-paced and a page turner.

The series centres around Claire, a Texas Prairie University student in the vampire-controlled city of Morganville, and her human/vampire mix of housemates. Bite Club sees Claire’s troubled human boyfriend Shane caught up in the anarchic plans of a group of vampires intent on bringing well-ordered Morganville down. It’s up to Claire, her housemates and her eccentric vampire boss to try and save Shane and the town, before it’s too late.

The pace of Bite Club was good and the character’s emotions gritty, raw and believable. The book was packed with very visual action sequences, which for me played out comfortingly like an episode of Buffy the Vampire Slayer. The writing was subtly descriptive and I found I could easily picture the characters and the town of Morganville within moments of picking the book up. The dialogue was made for TV, with the gang’s chemistry again very reminiscent of Buffy, or The Vampire Diaries.

I have to admit for me, there wasn’t quite enough actual supernatural romance, with the focal relationship being between two humans in a vampire-dominated town. So if like me you get your thrills from the tribulations and restrained passions of the vampire/human courtship, a la Edward and Bella or Bill and Sookie, Bite Club won’t quite satisfy. There are hints at the difficulties of such a relationship in the side story of human character Eve and vampire Michael, which I’m sure will be explored in the next book, but I’d have liked to delve a little further into the lives of these two.

Claire was likeable and easy to identify with. What was harder to identify with was her love of rough-around-the-edges, bad-boy Shane. Maybe it’s just that Edward Cullen has ruined all future romantic male leads for me or maybe I just don’t get the bad boy thing – but I really felt Claire could do better! Still their love was intense and earnest and I was rooting for Claire to get her man back the whole time.

Bite Club is the perfect holiday read, like True Blood for teens – easy to get into and easy to enjoy.

One thought on “Get bitten by the Morganville Vampires”