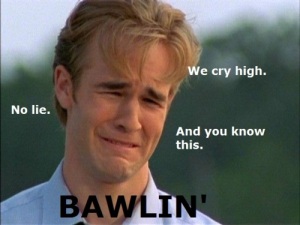 Just the other day Miss Thropist and I were wondering whatever happened to James Van Der Thingy from Dawson’s Creek.

Michelle Williams is quite the heavy hitter in the movies these days (if you ignore Deception), Katie Holmes is half of TomKat and the mother of the most fashionable toddler that ever lived, Joshua Jackson is enjoying more TV-paycheck security with Fringe… while  ol’ Beeky seems to be afflicted by the Curse of Eponymy (see: Seinfeld, Ellen, Sabrina the Teenage Witch) crossed with the Curse of being the Male Lead on a Teen Drama (see: Young Americans, The Wonder Years, Life as We Know It, The OC), both of which result in near or total oblivion, apart from the odd self-mocking cameo on a sitcom or murder suspect stint on a procedural.

But, for the first time in my life, I think Dawson is awesome. In a spot-on attempt to lampoon his whiny Creek dweller, and the constant mockery the character has inspired, he’s launched www.jamesvandermemes.com , a site chock-full of emotional gifs, from Awwwkwwward and Babyface to Eyebrow String Dancer and Eager Beaver.

There’s even a 10th anniversary edition of the Vandermeme that started it all (click to see it in action):

My favourite has to be “In Da Club”:

Which is your favourite Vandermeme?