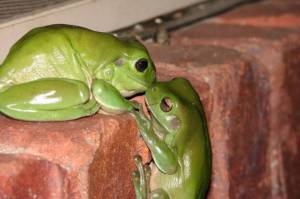 I’m frankly a little disappointed by the search terms on offer this week… but that may be because I have just discovered the hilarity of Freaks and Geeks, the kind of show I can’t believe I haven’t watched already. But more on that later… for now, it’s that time of the week when we taunt those unfortunate enough to discover our corner of the internet through suspect means.

What is a lesibian? A lesbian frog? Typo aside, I’m afraid we’re all out of videos of leather-clad lesbians getting it on, but if you send Miss Day some Blythe dolls, she may come up with the goods. Maybe send her a couple of leather jackets too.

I am rather partial to Virginia Andrews and wouldn’t say no to one of those shiny new 3D TVs… but  after googling this search term and having the foolishness to click on the top links…!! Not even Flowers in the Attic can make it better. For your own sake, don’t do what I did.

Is that a question? If so, then, yes, yes they are. Because women rock at everything. ESPECIALLY fidelity. So if you’re considering becoming a lesbian, I’d say go ahead. Let us know and we’ll send you a toaster.

I assume this person wants an image of a model hard at work. Voila:

Ok, Jensen Ackles doesn’t look so hard at work right now, but I can just tell he’s about to do some yoking or corralling, or whatever it is pony-riding cowboys do on long, hot summer days…

We have NEVER written this on PCP EVER! Apart from just now.

If you want junkie cartoon characters, I recommend Alice in Wonderland and The Yellow Submarine.

twilight princess vs ocarina of time

This isn’t funny at all, but more like WHAT ARE YOU DOING INSIDE MY MIND. I love The Legend of Zelda, although I’ve had to give up playing video games as it involves both hands (and thus prevents me from multitasking). I just checked and we’ve never written anything about Zelda. I’m seriously beginning to think Google has somehow hooked itself into my brain. Last week it knew about me and Miss Thropist discussing Cirque du Soleil and the sexy man washing himself at the Cirque du Soleil-esque cabaret we attended.