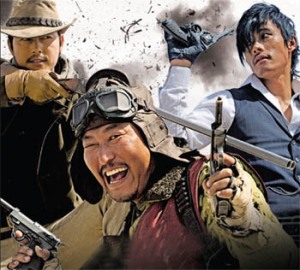 I am constantly amazed by the length of my posts. I start writing about a couple of books or a recently watched film and not only do the words seem to flow out of me, so do the tangents. However, I reckon that I should be able to be reasonably pithy about Joheunnom nabbeunnomisanghannom (or The Good, The Bad, The Weird), the first Korean film I’ve watched in Korea.

It’s a pretty fun action movie, it doesn’t have an over-abundance of plot but it’s not completely stupid either. It’s got all the elements of a typical Western (or rather ‘cowboy’) movie, at least as far as I know- I’m not exactly well versed in the genre, unless I can count Blazing Saddles. The actual look of the film was great too, the desert scenes were magnificent but I especially loved the frantic scenes in the Ghost Market or on the train. I always love stuff like that, where there’s so much attention lavishly paid to all these little details which the audience doesn’t really get to take in properly, but the overall impact more than makes up for that. Train shoot outs are always brilliant too, whether here, in Firefly or even Due South. There were quite a lot of funny moments too, I couldn’t stop giggling when Yoo Dae-Goo stuck his hand under the dead girl’s dress for just a few moments too long, and then triumphantly pulled out the wad of money.

It was quite a violent movie (there were several moments when we found ourselves doing a synchronised hand over the mouth-gasp-wince routine), but I don’t really have a problem with that. I can see why people don’t like the idea that violence is funny in and of itself, but sometimes it really, really just is. Or maybe I’m a sadist, whatever. Byung-hun Lee was probably the best thing about the film, he isn’t exactly bad looking in general but he was just ridiculously hot here, and went around being smouldering and insane in exactly the right way. I think you ought to watch the film just so you’ll understand what I’m talking about, but failing that you could just watch the trailer which gives you a bit of an idea. The scene where he flounces around in a blanket and decimates a millipede (or whatever it is) is particularly brilliant. The way that Byung-hun Lee walked and moved did kind of remind me of Johnny Depp somehow, but every time he turned around I was much happier with the face I was presented with.

Woo-Sung Jung was also great, and easy on the eyes, he had a bit of Harrison Ford vibe going on- but that might have just been the hat. I really want a cowboy hat and a nice billowy coat. Actually I think I have both of those things just not here, and that’s probably a good thing because it’s too hot for layers (which doesn’t stop me). I think the ending of the film could have perhaps come a little sooner, it was a bit too long. Essentially I only think that two endings are acceptable for anything: either an orgy happens or rocks fall and everyone dies. The Good, The Bad, The Weird almost plumped for the second one, which I think would have been mightily fun. The actually ending was decent though, and really I think that all men ought to smoke (not at me though, just in general).

R claimed that I’m ‘isanghannom’ (i.e. the weird one), which normally I wouldn’t argue with. However his reasoning was that I’m obviously very bizarre because I’d rather see the new X-Files movie than Mamma Mia. I’m sure the new film is bad, but there’s quite a lot of things I’d rather suffer than watching Mamma Mia. He balked at the idea of knocking me unconscious so he’d have someone to go watch it with though, not because it seemed morally reprehensible but because he’d have to shell out for my ticket too if I was passed out. I guess that leaves J to be ‘the good’.